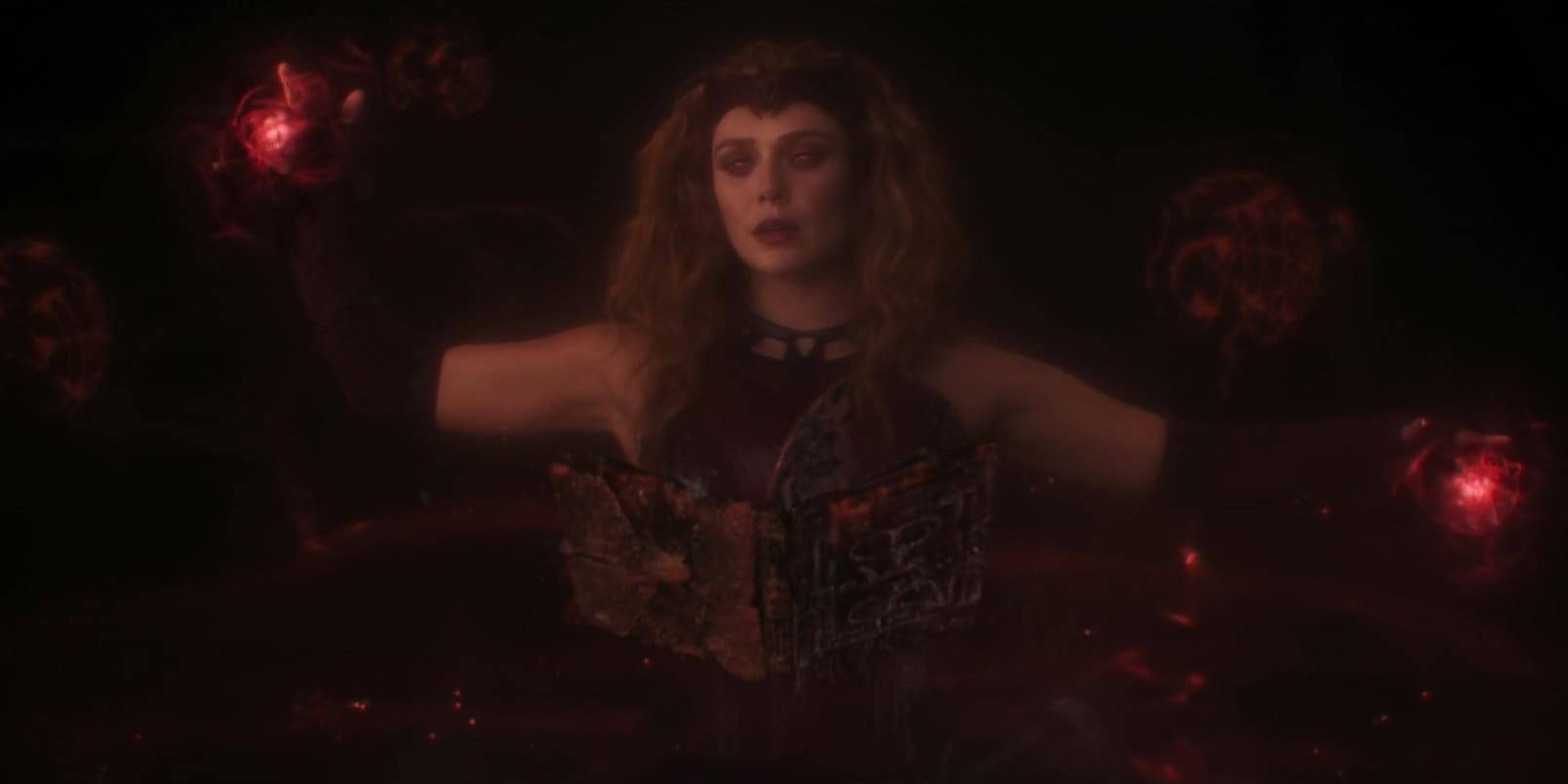 So we have reached the end of the series. There were rumours persisting that a 10th episode would be included, however this is more than two weeks after episode 9 streamed and no signs of another episode. This episode wrapped up all the storylines so not sure where an additional episode would fit. Episode 9 begins where the last episode left off. Agnatha has taken Wanda’s boys captive. The boys manage to be freed and it is revealed Agatha wants to absorb Wanda’s power. Much like she did with the witches in Salem, Agatha can consume Wanda’s power if she attacks her with it. Initially Wanda appears to have the upper hand but during the conflict, the white Vision appears and makes contact with Wanda. She is confused at first and wants to believe that Vision is back from outside the Hex. At first he gently touches her. His touch turns aggressive as he tries to squeeze the life out of her. Before it can go further the other Vision returns and saves Wanda from the torment. The two visions continue to fight through the episode. Vision and Wanda vow to protect Westview because they consider it to be their home. Agatha leads Wanda to be confronted by the people of Westview as Agatha frees the residents from their sitcom roles. They turn on Wanda, who begins to open the barrier to allow them to escape. Hayward sneaks inside with multiple S.W.O.R.D. personnel. Meanwhile Monica is trapped by Petrio in his mancave while she watches the fight through a window. He uses his power to prevent her from leaving. She figures out that a necklace Petrio is wearing is what is causing him to be under Agatha’s control. Monica removes the necklace and finds that Petrio is not Petrio. He is a Westview resident named Ralph Bohner. So this is Agatha’s husband and this is Evan Peters character reveal. What a let down!!! No multiverse crossover, no intro  to the X-men and no real pay off to include Evan Peters in the MCU. Hopefully there is more to Peters than being added as a misdirect for fans. If so, I can’t help but be disappointed. By opening the barrier we see that Vision, Tommy and Billy start to disintegrate so she is forced to close it. Wanda then starts to orchestrate an illusion to take Agatha back to the Salem witch trials. Eventually Agatha turns the table on Wanda at the trial and absorbs some of her power. Breaking the illusion Wanda is joined by her boys and Vision. The two visions shortly continue their fight but the Westview Vision tries another approach and begins a dialogue with the white Vision. The Westview Vision continues his dialogue and convinces and offers to restore the white Vision’s memories. He accepts and leaves Westview. Hayward infiltrates  Westview and begins to fire bullets at Tommy and Billy. The two are saved by Moinca saving by using her newly developed powers. Darcy Lewis manages to trap Hayward in his vehicle and he is detained. As Wanda transfers her magic, she creates magical runes around the barrier to strip Agatha of her powers and trap her permanently inside Westview. Agantha’s punishment served by Wanda is to remain in Westview as the noisy neighbour character.The family returns home as the barrier collapses. Her and Westview vision tuck Billy and Tommy into bed. The two then bid farewell, Vision reassures her that somehow they will see each other again one day since they have said goodbye before, as he fades away along with their house. Wanda then approaches Monica to make peace and goes into hiding after feeling guilty of what the Westview residents went through. The mid-credits scene shows Monica is informed by a FBI agent who reveals herself to be a skrull and requests Monica to join Nick Fury in space. In a post-credits scene,  Wanda is seen studying the Darkhold in her astral form in cabin, Wanda suddenly hears her sons calling for help.

So that’s a wrap WandaVision is finished. Through the being and to the end WandaVision provided top calibre acting, interesting plot points and a much needed dive back into the MCU after a long break. Through the course of the series many fans theorized what direction WandaVision would take. Based on all the fandom talk surrounding the series I believe this has altered my expectations. I was expecting a big reveal of a classic marvel character appearing. Especially when Paul Bettany the actor playing Vision said that an actor who he always wanted to work with will appear in the finale. The actor he was mentioning was himself as played both versions of Vision. Talk like this created so much hype. Furthermore, the misdirect of Evan Peters being Quicksilver only to be revealed as a westview resident named Ralph Bohner contributed to the let down of high expectations. If not for these expectations I would give WandaVision a good rating as a stand alone series, however as a marvel fan I am disappointed. Another issue I want to point out is the mystery of the series. To start the show with the sitcoms themes and not provide any exposition you lead the viewers to assume a big reveal will happen to explain everything. There wasn’t  much of a big reveal. Wanda started the Hex because of her grief and only ended it because Agatha wanted her powers and waited for the right moment to capture her. The explanation of the Hex was very straightforward and not all that surprising. I felt it was a missed opportunity. The writers could have added another layer of explanation other than Wanda being responsible for it all. As mentioned before, the acting of the portrayed by Elizebth Olsen, Paul Bettany and Kathryn Hahn was top notch and really engaged the viewer. I give the series a 7/10. Since this is a couple weeks after the last episode aired, Falcon and the Winter Soldier has streamed. I will provide a review of the series.