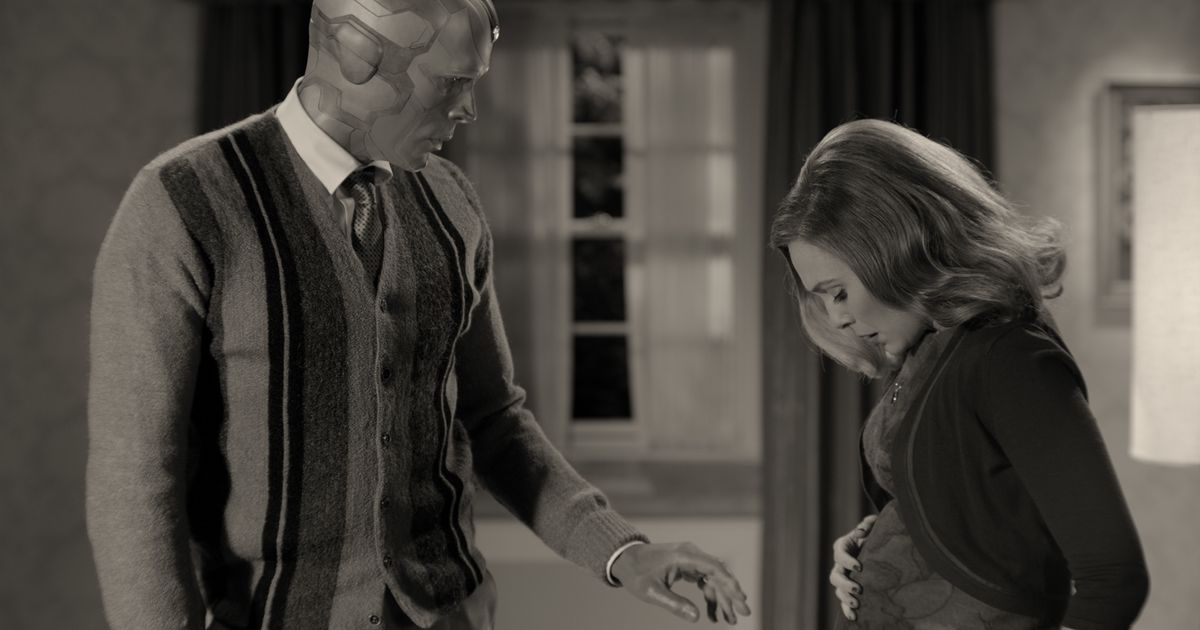 The second episode of Wanda Vision continues with the black and white theme with a live studio audience but this time it takes place in the 60s. The episode starts with the couple getting ready for bed but begin to hear strange noises outside their house. With safety in mind, Vision decides to join the neighborhood watch. The next morning, they practice a magic act in order to join the neighbourhood talent show and try to connect with community members. Later on Wanda discovers a toy helicopter with the sword logo on it but in full colour on her front lawn. I believe this signifies that the outside World of westview or the MCU as we know it, is trying to contact  Wanda. The toy being in full colour shows that the power Wanda uses to change Westview has not affected the toy helicopter. She is then distracted by Agnes, who invites her to a gathering hosted by Dottie Jones, leader of the neighborhood. The members of westview often mention “the children” of the community throughout this episode. No actual children appear. Anges also mentions her husband Ralph. She mentioned  him in the first episode as well. I believe there is some mystery surrounding him as we have not seen him yet and may have a big role in how things are playing out in Westview. Wanda is introduced to Geraldine who is actually Monica Rambeau. We see her character in Captain Marvel, she was the young daughter of Maria Rambeau and helped captain marvel choose the colour scheme of her costume. Wanda eventually has an unpleasant conversation with Dottie who feels that she is a threat to the members of Westview. As Wanda assures her that she is a non threat a radio behind Dottie can be heard asking for Wanda’s attention while trying to figure out what is happening. The radio eventually explodes and the drinking glass Dottie was holding shatters. The shattered glass causes Dottie to bleed in colour. After a few seconds the characters forget what happens and things return to normal. Again the full colour shows up in a moment when Wanda is distracted and not focusing on what’s happening in front of her.

Vision then attends the neighbourhood watch meeting and is offered a piece of chewing gum that he accidentally swallows. With some animation to look like it was created in the 60s we see that the gum causes his internal mechanics to malfunction. Like a gear system stopping when an object is wedged in it. This in turn causes him to be intoxicated. When Vision arrives at the talent show, his condition leads him to inadvertently reveal his superpowers. Wanda’s own abilities cover him, to make Vision look like he is doing simple magic tricks, and Geraldine is teleported as part of the act’s finale. Their performance is received by the Comedy Performance of the Year Award by Dottie. When they return home, Wanda suddenly becomes pregnant. As she and Vision are about to celebrate, they hear the noise outside again and walk out to find a beekeeper climbing out of the sewers. Disturbed by that sight, Wanda “rewinds” the events on-screen to her pregnancy reveal and the world around them suddenly changes to a 1970s color-filled aesthetic. The Beekeeper may represent a breach in Westview just like the toy helicopter. A commercial during the WandaVision program advertises Strücker watches with the Hydra logo on them.

What we learned from this episode about the overall plot of the series, is that Wanda is happy with the way the community members are living in Westview. She is willing to use her powers to safeguard Westview at any cost. If I were to guess, the people of Westview are under the spell of Wanda and any threat to that would be catastrophic to Wanda. The devastating loss of Vision   is why Westview is the way it is and another reality is setup. Disney Plus released the first 2 episodes together. This may have been to coincide with the release of Falcon and the Winter Soldier so the two shows don’t overlap. However they may have been released together because both episodes are around the 30 min mark and not much was revealed. Many of our questions have not been answered yet.  The next episode will take us to the 70s era hopefully some more plot points would cause us to be more engaged. For this episode I would give it a 6/10.