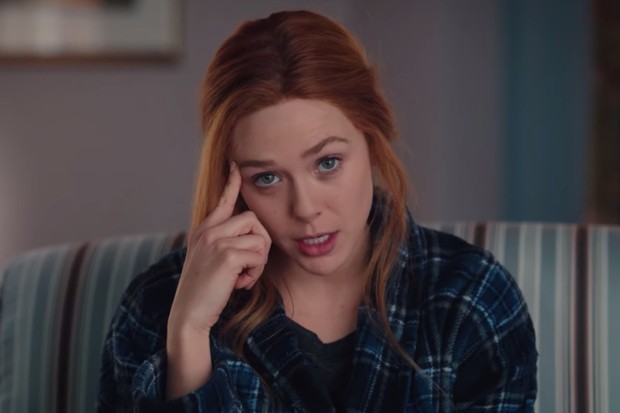 So we have reached the sitcoms of the 2010s. My favorite show, the Office and Modern Family are a heavy influence. After expanding the Hex in the previous episode, Wanda is burned out and wishes to lounge around the house. Agnes arrives at the house and convinces Wanda to let her watch the boys for the day while she rests. After the boys and Agnes leave Wanda notices that objects in the house are constantly changing and is unable to control them. Vision appears to be back to form after leaving the hex and get caught in the expansion. Darcy and the S.W.O.R.D. base were also caught in it. The hex converted them into an outdoor circus. Vision recognizes Darcy after leaving the hex for a moment in the previous episode. He breaks her out of the trance and talks about the events of the series. The two of them decide to steal a circus van and drive to see Wanda. We see Monica and Jimmy head to meet the astrophysicist and her team that was mentioned earlier in the series. They unveil a vehicle that is designed to penetrate the hex barrier. Monica operates the vehicle and tries to enter the hex. The barrier slows and then stops the vehicle and Monica jumps out. Half the vehicle is converted into a pickup truck. Monica has a moment and enters the hex on foot. As she enters her body changes on a molecular level and she emerges with her eyes glowing and gains powers. On their way to see Wanda, Darcy explains Vision’s history and lets him know that Wanda is responsible for the Westview phenomen and that she is doing this all for him. There are numerous traffic delays that have slowed their route to see Wanda. Vision eventually uses his powers to fly the rest of the way. Monica arrives at Wanda’s house to warn her about Hayward and his intentions. Wanda is angered and does want to hear what she has to say. Wanda attacks her, but Monica is able to land firmly due to her newfound powers. Their confrontation is interrupted by Agnes who asks Monica to leave and takes Wanda into her house. While in Agne’s home Wanda is left feeling uneasy and asks where the boys are. Anges tells her that they are in the basement. Wanda enters and follows a typical unfinished basement but discovers a pathway to a dungeon that has mystical and ancient symbols and purple glowing tree roots running along the walls and floors. There is a mystical book that is in the middle of the room. Wanda is suddenly trapped and Anges enters and reveals herself to be Agatha Harkness, a powerful sorceress who has been controlling part of the events of Westview and has put Wanda under a trance. She reveals that she killed Sparky and sent “Pietro” to Wanda, while shifting the WandaVision program to a new show decided to Agatha. Monica investigates Agatha’s house and discovers her lair in the basement, only to be caught by Quicksilver.

So there you have it. We finally have a reveal. Anges or now known as Agatha was behind most of it. I am assuming that the grief that Wanda has gone through as a character played right into the hands of Agatha. We still dont know what her motive is exactly but it appears that she needed Wanda to create the hex. Agatha’s power is limited to sorcery and controlling people to do her deeds. If i were to guess I think Agatha wants to expand the hex as far as possible. Which is why she pretend to be a victim causing Vision to leave the hex. For the next episode she may cause a tragedy for Wanda and manipulate her to expand it even more. We have reached a point in the show were most of the mystery has been revealed and we know character motivations. It was good to see Evan Peters still be on the show. Hopefully he will be the new Quicksilver of the MCU. They may change his character to be a villian just like the comics. Episode 8 will air tomorrow hopefully we get some more interesting reveals and ties to the overal MCU narrative.