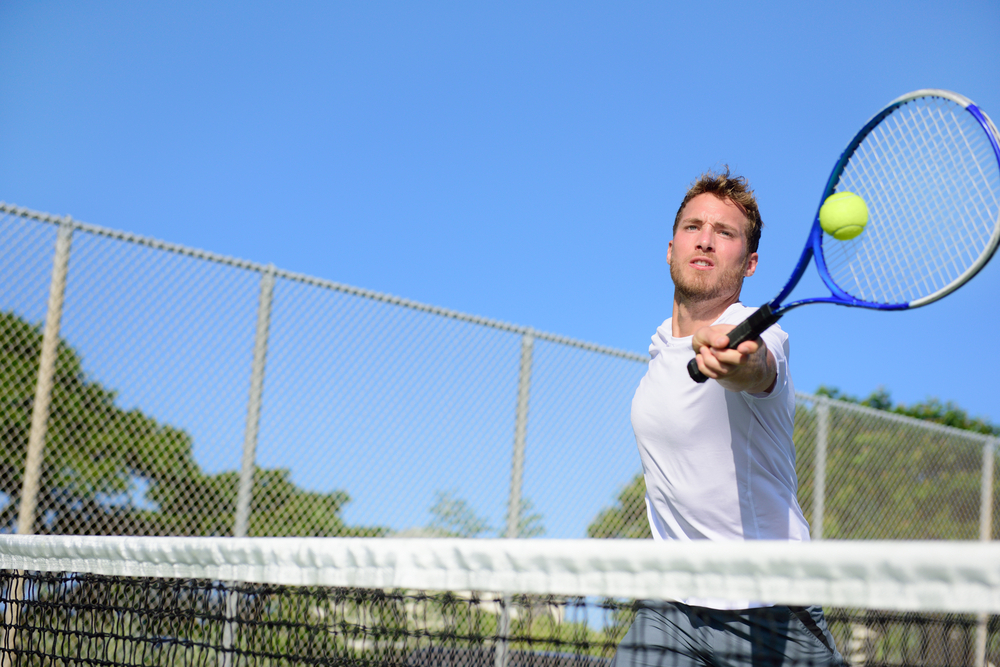 The net attack is the heavy artillery of tennis. It is supposed to crush all defense. As such it must be regarded as a point-winning stroke at all times, no matter whether the shot is volley or smash.

Once at the net hit from the point at the first opportunity given to get the racquet squarely on the ball. All the laws of footwork explained for the drive are theoretically the same in volleying. In practice, ou seldom have time to change your feet to a set position, so you obviate trouble by throwing the weight on the foot nearest to the ball and pushing it in the shot.

Volleys are of two classes:

(1) the low volley, made from below the waist; and (2) the high volley, from the waist to the head. In contradistinction to the hitting plane classification are the two styles known as (1) the deep volley and (2) the stop volley.

All low volleys are blocked. High volleys may be either blocked or hit. Volleys should never be stroked. There is no follow through on a low volley and very little on a high one.

You will hear much talk of “chop” volleys. A chop stroke is one where the racquet travels from above the line of flight of the ball, down and through it, and the angle made behind the racquet is greater than 45 degrees, and many approaches 90 degrees. Therefore I say that no volleys should be chopped, for the tendency is to pop the ball up in the air off any chop. Slice volleys if you want to, or hit them flat, for both these shots are made at a very small angle to the flight-line of the ball, the racquet face traveling almost along its plane.

In all volleys, high or low, the wrist should be locked and absolutely stiff. It should always be below the racquet head, thus bracing the racquet against the impact of the ball. Allow the force of the incoming shot, plus your own weight, to return the ball and do not strive to “wrist” it over. The tilted racquet face will give any required angle to the return by glancing the ball off the strings, so no wrist turn is needed.

Low volleys can never be hit hard, and owing to the height of the net should usually be sharply angled, to allow distance for the rise. Any ball met at a higher plane than the top of the net may be hit hard. The stroke should be crisp, snappy, and decisive, but it should stop as it meets the ball. The follow-through should be very small. Most low volleys should be soft and short. Most high volleys require speed and length.

The “stop” volley is nothing more than a shot blocked short. There is no force used. The racquet simply meets the oncoming ball and stops it. The ball rebounds and falls of its own weight. There is little bounce to such a shot, and that may be reduced by allowing the racquet to slide slightly under the ball at the moment of impact, thus imparting backspin to the ball.

Volleying is a science-based on the old geometric axiom that a straight line is the shortest distance between two points. I mean that a volleyer must always cover the straight passing shot since it is the shortest shot with which to pass him, and he must volley straight to his opening and not waste time trying freakish curving volleys that give the base-liner time to recover. It is Johnston’s great straight volley that makes him such a dangerous net man. He is always “punching” his volley straight and hard to the opening in his opponent’s court.

A net player must have ground strokes in order to attain the net position. Do not think that a service and volley will suffice against first-class tennis.

Strive to kill your volleys at once, but should your shot not win, follow the ball’s cross and again cover the straight shot. Always force the man striving to pass you to play the hardest possible shot.

Attack with your volleys. Never defend the ball when at the net. The only defensive volley is one at your feet as you come in. It is a mid-court shot. Volleys should win with placement more than speed, although speed may be used on a high volley.

Closely related to the volley, yet in no way a volley stroke is the overhead smash. It is the Big Bertha of tennis. It is the long-range terror that should always score. The rules of footwork, position, and direction that govern the volley will suffice for the overhead. The swing alone is different. The swing should be closely allied to the slice service, the racquet and arm swinging freely from the shoulder, the wrist flexible and the racquet imparting a slight twist to the ball to hold it in court. The overhead is mainly a point winner through speed since its bounce is so high that a slow placement often allows time for recovery.

Do not leap in the air unnecessarily to hit overhead balls. Keep at least one foot, and when possible both feet, on the ground in smashing, as it aids in regulating the weight, and gives better balance. Hit flat and decisively to the point if desired.

Most missed overhead shots are due to the eye leaving the ball; but the second class of errors is due to a ck of confidence that gives a cramped, half-hearted swing. Follow through your overhead shot to the limit of your swing.

The overhead is essentially a double shot because in singles the chances of passing the net man are greater than lobbing over his head, while in doubles two men cover the net so easily that the best way to open the court is to lob one man back.

In smashing, the longest distance is the safest shot since it allows a greater margin of error. Therefore smash ‘cross court when pressed, but pull your short lobs on her side as determined by the man you are playing.

Never drop a lob you can hit overhead, as it forces you back and gives the attacking position to your opponent. Never smash with a reverse twist, always hit with a straight racquet face and direct to the opening.

Closely connected to the overhead since it is the usual defense to any hard smash, is the lob.

A lob is a high toss of the ball landing between the service-line and the baseline. An excellent lob should be within 6 feet of the baseline.

Lobs are essentially defensive. The ideas in lobbing are:

(3) to tire your opponent

(4) occasionally to, win cleanly by placement. This is usually a lob volley from a close net rally and is a slightly different stroke.

There is (1) the chop lob, a heavily under-cut spin that hangs in the air. This, is the best defensive lob, as it goes high and gives plenty of time to recover position. (2) The stroke lob or flat lob hit with a slight topspin. This is the point-winning lob since it gives no time to, the player to run around it, as it is lower and faster than the chop. In making this lob, start your swing like a drive, but allow the racquet to slow up and the face to tilt upward just as you meet the ball. This should seldom go above 10 feet in the air since it tends to go out with the float of the ball.

The chop lob, which is a decided under the should rise from 20 to 30 feet, or more, high and must go deep. It is better to lob out and run your opponent back, thus tiring him, than to lob short and give him confidence by an easy kill. The value of a lob is mainly one of upsetting your opponent, and its effects are very apparent if you unexpectedly bring off one at the crucial period of a match.

What Do you Know About The Effects of Artificial Intelligence?

WHAT IS THE PSYCHOLOGY OF SINGLES AND DOUBLES IN TENNIS?