WHAT IS THE PSYCHOLOGY OF SINGLES AND DOUBLES IN TENNIS? 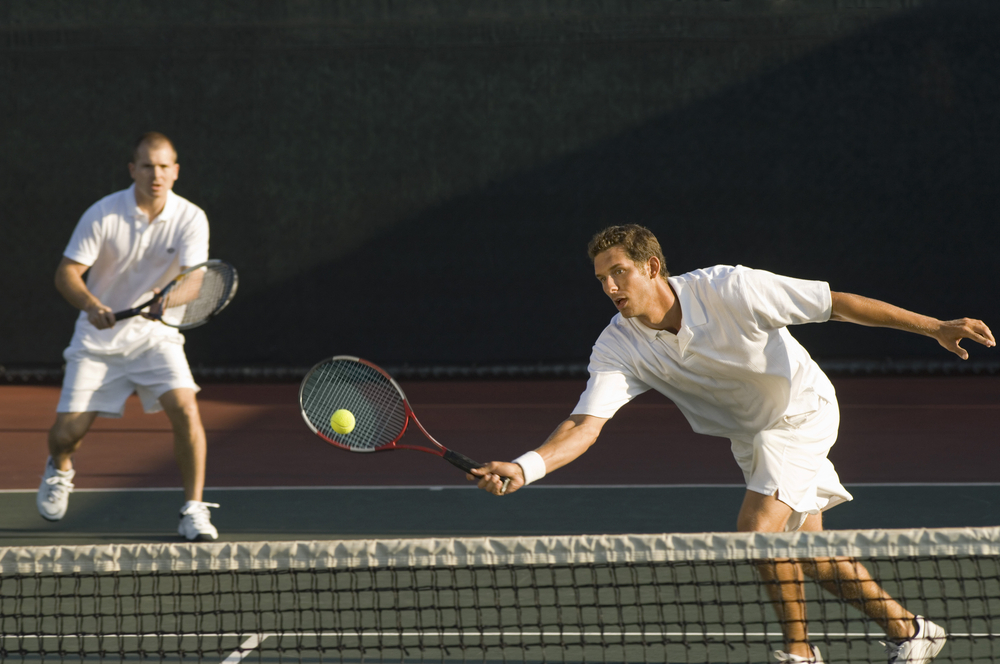 Singles, the greatest strain in tennis, is the game for two players. It is in this phase of the game that the personal equation reaches its crest of importance. This is the game of individual effort, mental and physical.

A hard 5-set singles match is the greatest strain on the body and nervous system of any form of sport. Singles is a game of daring, dash, speed of foot, and stroke. It is a game of chance far more than doubles. Since you have no partner dependent upon you, you can afford to risk error for the possibility of speedy victory. Much of what I wrote under match play is more for singles than doubles, yet let me call your attention to certain peculiarities of singles from the standpoint of the spectator.

A gallery enjoys personalities far more than styles. Singles brings two people into close and active relations that show the idiosyncrasies of each player far more acutely than doubles. The spectator is in the position of a man watching an insect under a microscope. He can analyze the inner workings.

The freedom of restraint felt on a single court is in marked contrast to the need for teamwork in doubles. Go out for your shot in singles whenever there is a reasonable chance of getting it. Hit harder at all times in singles than in doubles, for you have more chance of scoring and can take more risk.

Singles is a game of the imagination, doubles a science of exact angles.

Doubles is four-handed tennis. Enough of this primary reader definition.

It is just as vital to play to your partner in tennis as in bridge. Every time you make a stroke you must do it with a definite plan to avoid putting your partner in trouble. The keynote of doubles success is teamwork; not individual brilliancy. There is a certain type of teamwork dependent wholly upon individual brilliancy. Where both players are in the same class, a team is as strong as its weakest player at any given time, for here it is even teamwork with an equal division of the court that should be the method of play. In the case of one strong player and one weaker player, the team is as good as the strong player can make it by protecting and defending the weaker. This pair should develop its teamwork on the individual brilliancy of the stronger man.

The first essential of doubles play is to PUT the ball in play. A double fault is bad in singles, but it is inexcusable in doubles. The return of service should be certain. After that, it should be low and to the server coming in. Do not strive for clean aces in doubles until you have the opening. Remember that to pass two men is a difficult task.

Always attack in doubles. The net is the only place in the court to play the doubles game, and you should always strive to attain the net position. I believe in always trying for the kill when you see a real opening. “Poach” (go for a shot that is not really on your side of the court) whenever you see a chance to score. Never poach unless you go for the kill. It is a win or nothing shot since it opens your whole court. If you are missing badly do not poach, as it is very disconcerting to your partner.

The question of covering a doubles court should not be a serious one. With all men striving to attain the net all the time, every shot should be built up with that idea. Volley and smash whenever possible, and only retreat when absolutely necessary.

When the ball goes toward the side-line the net player on that side goes in close and toward the line. His partner falls slightly back and to the center of the court, thus covering the shot between the men. If the next return goes to the other side, the two men reverse positions. The theory of court covering is two sides of a triangle, with the angle in the center and the two sides running to the side-lines and in the direction of the net.

Each man should cover overhead balls over his own head, and hit them in the air whenever possible since to allow them to drop gives the net to the other team. The only time for the partner to protect the overhead is when the net man “poaches,” is outguessed, and the ball tossed over his head. Then the server covers and strives for a kill at once.

Always be ready to protect your partner, but do not take shots over his head unless he calls for you too, or you see a certain kill. Then say “Mine,” step in, and hit decisively. The matter of overhead balls, crossing under them, and such incidentals of teamwork are matters of personal opinion and should be arranged by each team according to their joint views. I only offer general rules that can be modified to meet the wishes of the individuals.

Use the lob as a defense, and give time to extricate yourself and your partner from a bad position. The value of service in doubles cannot be too strongly emphasized since it gives the net to the server. Service should always be held. To lose service is an unpardonable sin in first-class doubles. All shots in doubles should be low or very high. Do not hit shoulder-high as it is too easy to kill. Volley down and hard if possible. Every shot you make should be made with a definite idea of opening the court.

Hit down the center to disrupt the team work of the opposing team; but hit to the side-lines for your aces.

Pick one man, preferably the weaker of your opponents, and center your attack on him and keep it there. Pound him unmercifully, and in time he should crack under the attack. It is very foolish to alternate attack since it simply puts both men on their game and tires neither.

If your partner starts badly play safely and surely until he rounds to form. Never show annoyance with your partner. Do not scold him. He is doing the best he can, and fighting with him does no good. Encourage him at all times and don’t worry. A team that is fighting among themselves has little time left to play tennis, and after all, tennis is the main object of doubles.

Offer suggestions to your partner at any time during a match, but do not insist on his following them, and do not get peevish if he doesn’t. He simply does not agree with you, and he may be right. Who knows?

Every doubles team should have a leader to direct its play, but that leader must always be willing to drop leadership for any given point when his partner has the superior position. It is a policy of attack not a type of stroke that the leader should determine.

Pick a partner and stick to him. He should be a man you like and want to play with, and he should want to play with you. This will do away with much friction. His style should not be too nearly your own, since you double the faults without greatly increasing the virtues.

Five Reasons for You to Get a Hybrid Car