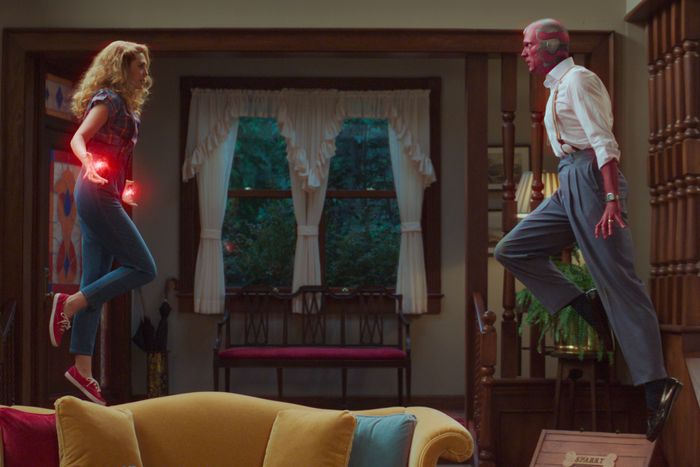 The last episode we got to explore the narrative outside of Westview and were introduced to new characters. We got a different perspective from the sitcom theme. This episode we jump back into the 80s sitcoms. The influences for this episode include shows like Family Ties, Full House, Growing Pains and Rosanne. The episode begins with Wanda and Vision trying to soothe and comfort their babies Tommy and Billy at their home. Wanda uses her powers to try and quiet them with no affect. This is significant since Wanda’s power appears to control all of Westview. Her powers not affecting Tommy and Billy will come into play later in the series. Anges enters the home with her 80s exercise attire and mentions she can hear the babies cry while outside their home  She says she can help soothe the babies but appears to say something that causes her to break character and asks Wanda if she can redux the scene. Vision notices what she said and brings it up to Wanda who brushes it off as not knowing anything. They suddenly notice the babies being silent and credit Anges but they realize Tommy and Billy have rapidly grown into school age children to which Anges does not react. We then get to see the S.W.O.R.D base where director Tyler Hayward states that Wanda is a villian and must be stopped. He shows CCTV footage of Wanda stealing Vision’s disassembled body from S.W.O.R.D headquarters. Jimmy Woo describes Wanda’s history and Monica Rambeau tries to convince Hayward that Wanda does not have malicious intent. Darcy calls the Westview dimension the “Hex” because of its shape. Back at the Vision residence Tommy and Billy find a stray dog. Visions and Wanda are reluctant to keep the dog because of the boys being too young. Billy and Tommy instantly grow to become pre teenage boys. Anges enters the home and conveniently has dog accessories. Without hesitation Wanda uses her powers in front of Angnes and Vision shows frustration because of that. They name the dog “sparky”. At work, Vision reads an 80 style email from S.W.O.R.D. that exposes the nature of the Hex. He breaks the trance over his co-worker Norm, a real Westview resident named Abilash Tandon, who begs Vision to stop “her” until he reverts Abilash to Norm. Monica discovers that entering the Hex alters the appearance of people and objects to coincide with the current time period of Westview. Monica operates a drone from the 80s to surveil Westview. The drone was secretly armed with weapons by director Hayward before entering Westview. Monica finds Wanda and Hayward orders to fire at her. Wanda uses her power to prevent damage and cuts the signal with the S.W.O.R.D base. She later emerges from the hex with the drone and warns Hayward to leave her alone.  After Sparky unexpectedly dies, the twins ask their mother to bring him back to life, but she says they cannot do that and urges them to deal with their grief. Vision confronts Wanda about controlling the town including Norm. He reveals that he cannot remember his life or identity before coming to Westview. Tension is high, Wanda says that not everything is under her control, and she does not remember how it started. As things cool, the doorbell rings. Wanda opens the door to Petrio but not Arron Tyler Johns instead its Evan Peter’s version from the Fox Universe. Watching the broadcast, Darcy Lewis notes that Pietro has been “recast”.

WOW so much happened in this episode! And my assumption was correct. Evan Peters was cast to play his version of QuickSilver. However, we still need confirmation if it’s the exact same version from Fox. That’s just the icing on the cake of the episode. Vision is beginning to see beyond Wanda’s illusions and trying to find the truth. We see Wanda being aggressive in nature while trying to salvage Vision’s body at the Shield’s headquarters and Hayward describing her as a terrorist. This scene could potentially show Wanda turning into a villain. She was flirting with the idea in the beginning of Avengers: Age of Ultron. Additionally,the fact that Wanda’s power has no effect on Tommy and Billy will be another interesting plot point they can explore. Again we see Agnes appear whenever it’s convenient and Wanda is not afraid to show her powers. So even more evidence to show that Agnes is partaking in the choas of Wanda’s Westview. We still have not seen her husband Ralph which makes it more intriguing after each episode. His role could be huge. The fact that Evan Peter’s QuickSilver has shown up has me really excited. As I mentioned in a previous post, the clash of the Multiverse is the reason. We can see very intriguing crossovers like the rest of the Fox X-Men actors. Actors like Patrick Stewart, Hugh Jackman and Michael Fassbender. Along with those characters this opens the door to Sony’s characters like the previous spider-man’s coming together to create a SpiderVerse film. The assumption is the next spiderman film which is currently filming will include the former spider-man actors: Tobey Mcguire and Andrew Garfield. Can’t wait to watch that if that is a fact. Getting back to WandaVision, this episode is continuing the pattern of engaging and captivating me. I give this episode 8/10. I hope Evan Peters becomes the new MCU Quicksilver.